John over at Laziest Vegans blogged about his love of Gardein's Turkey Cutlets today and I could not agree more.  DAT GRAVY.   I would like to drink it by the bucketful, please.

Silas loves them but only if we all agree to call it "Tofu Cutlet".  He's been on a kick lately where he doesn't want anyone even pretending they are eating animals.  It's... getting interesting.  Especially so when a cashier told us today that she felt like a "chicken with it's head cut off today" and then proceeded to explain exactly how they act when their head is chopped of.  Silas jumped behind me and gasped.  I interrupted her to ask if she saw how scared he was and if she could please stop.  I can't even, you guys.

So we spent the next 20 minutes discussing why anyone would ever want to cut a head off a chicken and it just is a hard thing to explain when you can't fathom it either.  I just tried to go with the whole "We don't hurt the animals so that's good" line of conversation.   He didn't seem satisfied but he let it go.  Normally, he needs some time to process stuff, so I'm sure it'll come back up.  And once again, I'll curse that damned CVS cashier.

Anyway, Gardein!  So life is hectic and I'm exhausted, so we've been eating a lot of Gardein lately.  I hit a good sale at Publix and stocked up for busy periods like this.  So convenient to have in the freezer!  One of our local Publix's also started carrying a bunch of new Gardein stuff so we're enjoying the variety finally available to us.  Yay, Publix!

Currently, our family favorites are Turk'y Cutlets and Meatless Meatballs. But, honestly, we haven't tried anything that we don't love.

When I was an un-vegan kid, I begged for 3 Musketeers Bars or Soft Batch Cookies at the grocery store.

My vegan kids are totally different.  Shae used to beg, plead and negotiate for watermelon year round.  Still does, actually.  Now, Silas has been on a kick for months now, where almost always, the only item he asks for are "Crunchy Veggie Chips" which are just dried veggies.  His dad started bringing them home from World Market for him when he was still a really picky eater and we were trying anything and everything to get a veggie into him, and it's been a huge hit.  I usually buy them at Publix in the produce department.   He likes to eat the green beans first, but doesn't discriminate, loves them all. 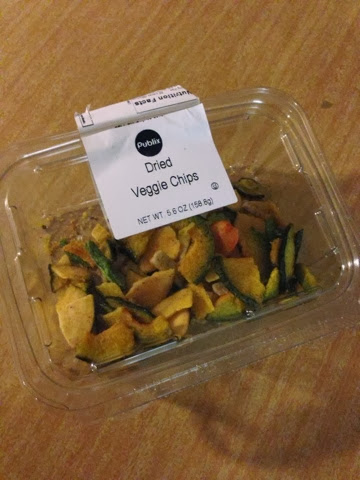 Silas had a Pizza & Pajama Day at preschool to celebrate P week.  They made little english muffin pizzas and had a "slumber party", which as far as I can tell meant a regular 3 hour day except in pajamas.  It was pretty cute, a sea of caped super heroes really.

His teacher had let me know at the beginning of the week so I sent in a lunchbag with a vegan english muffin, pizza sauce, Daiya Cheese and Tofurky Pepperoni for him.  He said it was delicious and his teacher said it went well, so yay!  Hopefully the rest of the year can be as easy foodwise.

Of course he had to make more of them at home after school to show us his new chef skills.  Also, Shae was not going to miss out on anything Tofurky related if he had anything to say about it. 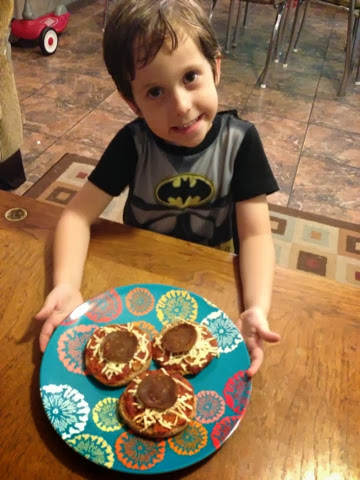 The directions, according to Chef Silas:

1. "Spread the pizza sauce with a spoon allllll around.  No licking the spoon because of microbes, gross." (Thanks, Magic School Bus!) 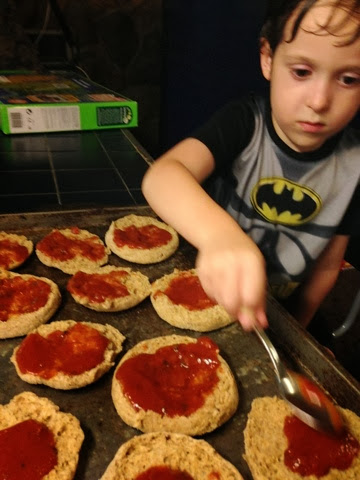 2. "Make them cheeeeeezeeyyyy.  You can eat this by itself as an ingredient!  It is yummy!  But not a lot or your pizzas will be sad." 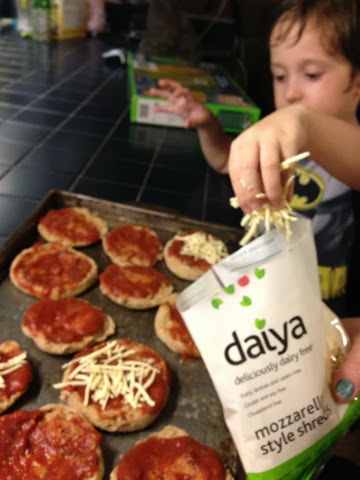 3.  "LOTS of cheese is better than a little cheese." 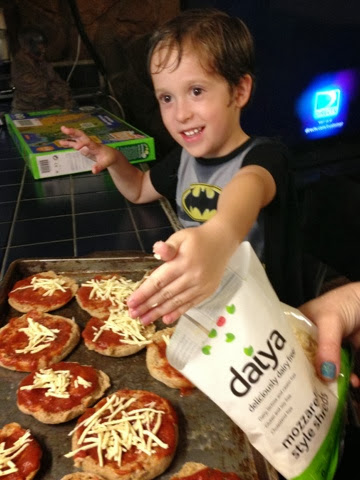 4.  "One pepperoni on each pizza because these guys are giants.  I put 5 on my pizza at school though, don't tell my brother Shae or he will eat them all like a skyscraper pizza!" 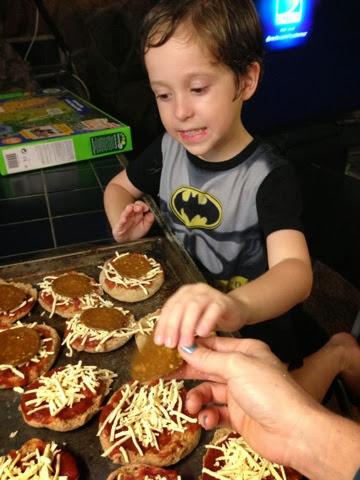 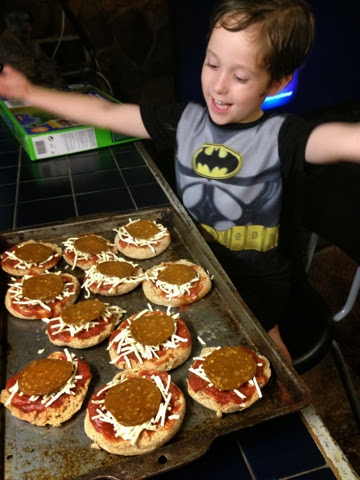 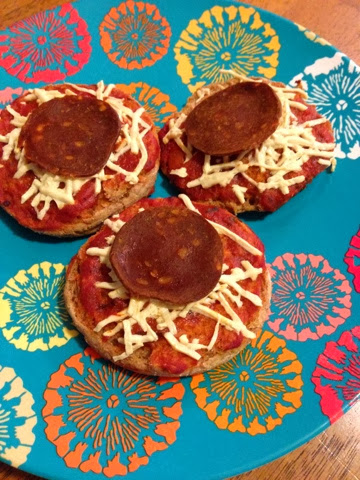 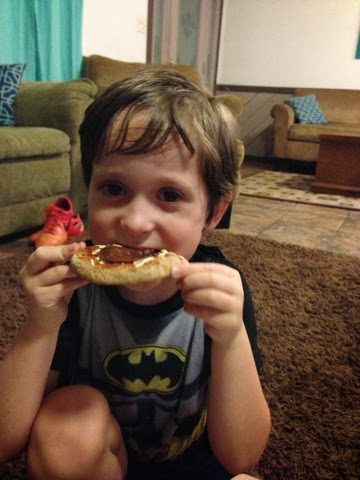 Just another picnic on a swing!

Let's just pretend that Vegan Month of Food is actually about a month of pictures of a smiling vegan kid eating the same stuff over and over again, okay?

Today, we had sauteed tofu and dipped it in hummus.  Silas declared it the "best dipping combo ever", so ketchup is feeling mighty rejected right now. 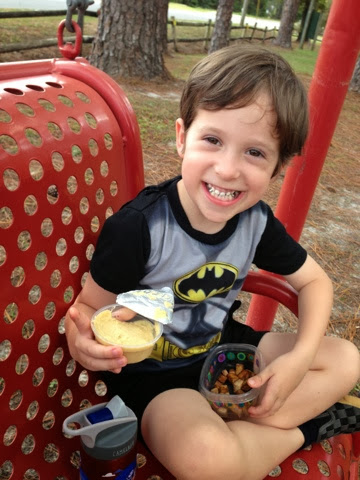 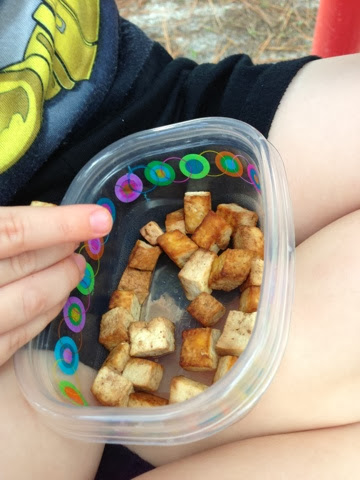 P is for Pancake!  This is P week and today is Pancake Day at preschool. 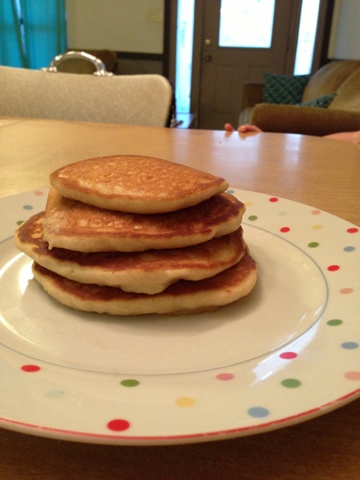 Recently we had an issue where Silas was given goldfish crackers to use in an activity (and then eat) at school and when he asked if they were vegan, he was told they were.  He even told them his mom said he can't eat them, but was told it's okay, he still could eat them.  Silas' little heart was broken when he came home and told me that "goldfish crackers have different ingredients now!" and I told him they weren't and it must have been a mistake.  Accidents happen, but his feelings were really hurt when he was told they were actually vegan.  Poor little dude cried and asked if the animals were hurting because of him!  We all talked him down and let him know it was just a teeny accident and not his fault, and the animals aren't mad at him at all.  Happens to everyone!

So sad though.  Talking it through helped a lot and at the end, he said "I'm okay now, Mommy.  I'll just poop them out and not eat them ever again.".  (so, so vegan)

So obviously I spoke to his teacher (again!) and explained veganism VERY CLEARLY and let her know how important it is to us ethically to be cruelty free.  I was told he "had a choice".  I stressed that Silas isn't reading yet, so he is relying on her and the other teachers & aides for accurate information.  He's very used to being able to fully trust all adults in his life and needs to be able to do that at school as well.  I explained that I will arrange and provide any vegan alternatives for him to be able to participate in the future, as I had told her at the beginning of the year.  I also let her know that Shae is 14 and we've never had this happen to him so I know it couldn't be too disruptive to the class dynamic. (ha!)

I walked away feeling a little disappointed by the reaction I got.  I felt a little dismissed.

But it turns out I was really heard!  Yeah, I'm shocked too. In an impressive turn of events, his teacher sent home a note at the beginning of this week letting us know that today is Pancake Day and Friday is Pajama Day where they will be making mini pizzas.  It said to let her know if there are any dietary restrictions & to bring in an alternative if so.  YAY!  Feels good to know that Silas' veganism is being taken seriously finally.  Also, I'm reminded at how little veganism is respected.  We have a whole new school to invade and educate and my little pancakes were going to be the first ambassador!  No pressure ( jk.  ALL THE PRESSURE.)

I used my favorite pancake recipe ever, Isa's Puffy Pillow Pancakes from the PPK Blog.   I think they are also going to be in her upcoming book Isa Does It (which I tested for and IT IS AMAZING.  Preorder asap, my friend.). 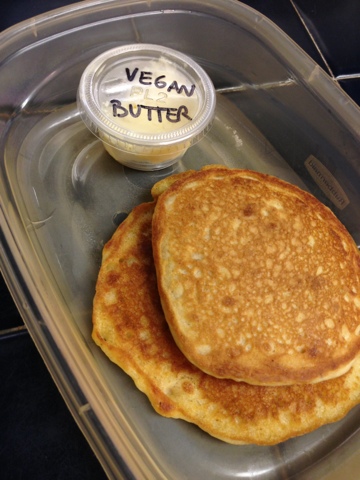 I also packed some Earth Balance. 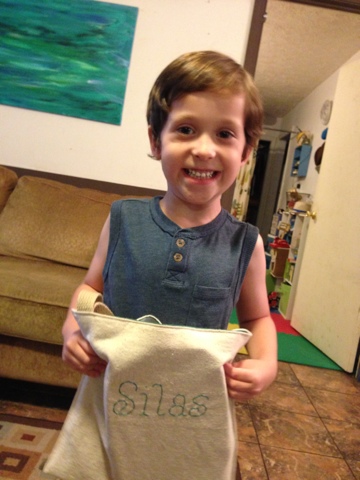 He was proud to take them to school with him in his adorable hand embroidered reusable lunch bag that his Faux Auntie Amanda (my bff) made for him as a New School gift this year.

His teacher let me know that Pancake time went perfectly today with no issues at all!  And Silas was super happy to chow down on his pancakes with his friends.  He reports back that his pancakes were the yummiest looking.  haha.

***FUN FACT!  I used baking soda by accident and actually had to make these pancakes TWICE yesterday.  This kid better know how much I love him!

I'm so exhausted you don't even know.  So today, you get a peek at what I've been eating.  I've been super stuck on kale salads lately.  Usually avocado massaged into kale, with whatever I can grab to throw on top of it.  Usually I'm eating super fast, since apparently now that school is in, I'm never ever home!  I'm a stereotypical vegan who could live off salads alone if left to my own devices (like, you know, remembering to keep ingredients in the house!)

Most important thing is to use an enormous bowl.  The skull one is actually a huge chip bowl leftover from a halloween party and the blue one is a mixing bowl.  Salads are meant to be BIG, y'all. 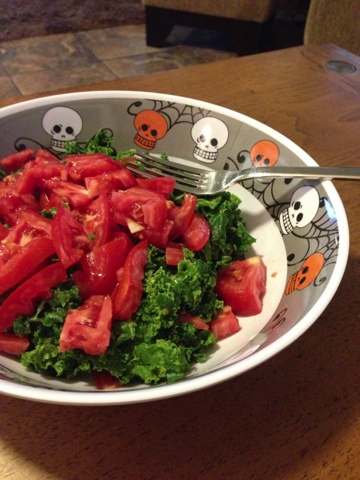 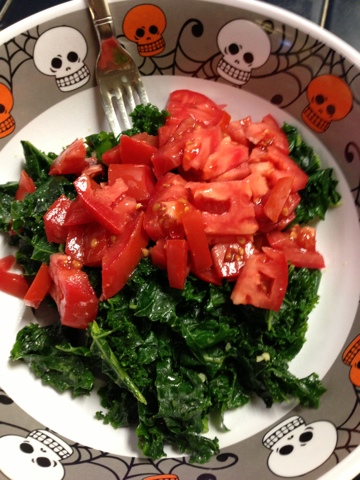 I try not to blog about Shae too much anymore because we all know I've humiliated him enough online already, but guess what, today we are peeking at his lunch.  He's in high school now and his food is all about total convenience.  It's easiest to eat a sandwich (Tofurkey, Tofutti American Cheese Slice, Vegenaise).  A big bag of grapes and apple slices that he always eats, and then today was Chex Mix (didn't eat, "was full") and a Builder's Bar for afterschool between soccer practice, if he needed it.  (he didn't!).

I don't love all the trash and usually we use containers and reusable sandwich baggies , but high school is hard enough (even though he says he LOVES it), so I'm okay with doing what makes it easier for him.

Can't even tell this lunch is vegan, right?  Sometimes you just want to eat your food and not answer a million questions! 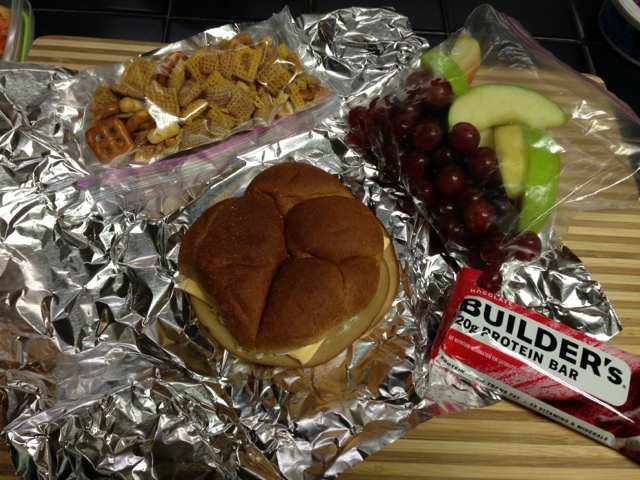 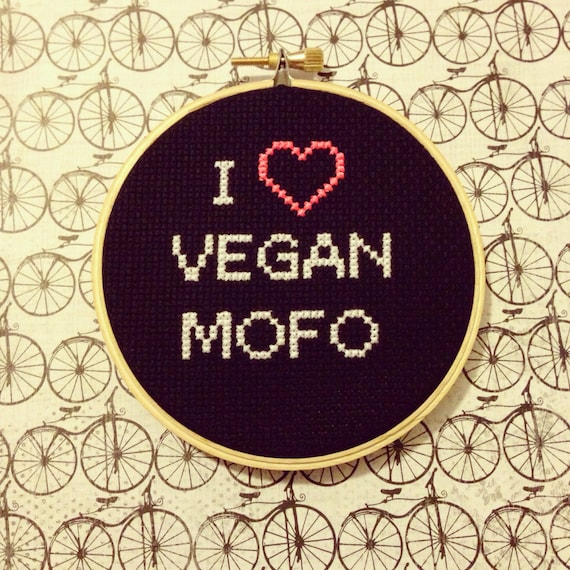